The Chevrolet Monte Carlo has always been a luxury Chevrolet coupe – but during its lifetime from 1970 to 2007 (with a break from 1989 to 1994), the Monte Carlo came in a variety of sizes, with a wide range of powertrain options.

Monte Carlos were plentiful, and that means there are still plenty around these days, along with the availability classic car parts. No matter what kind of vintage auto parts you may be looking for, there is a wide variety of Monte Carlo parts if you are restoring or refurbishing a Monte Carlo. Throughout its life, the Monte Carlo came in only one body style – a two-door. It’s just a matter of what year and model of Monte Carlo you prefer. There are plenty to choose from to suit your tastes and pocketbook.

The first Monte Carlo came out in the fall of 1969 for the 1970 model year. It was Chevy’s version of the Pontiac Grand Prix. The Grand Prix originally came out in 1962, but starting for the 1969 model year the Grand Prix had a separate, unique body. The most distinctive feature was a huge hood. The Grand Prix and Monte Carlo were low-priced entries in the emerging personal-luxury segment, taking on the likes of the Oldsmobile Toronado and Ford Thunderbird. A long hood, short trunk lid, two doors and lots of luxury touches were characteristics of cars in the personal-luxury car segment. (An exception was the Thunderbird, which offered both four-door and two-door models starting for the 1967 model year.)

The Monte Carlo shared many components with the intermediate Chevrolet Chevelle, including the firewall, windshield, trunk lid and rear window. At the time, there were two wheelbases for Chevelles: two-door models sat on a 112-inch wheelbase, while four-door models had a wheelbase of 116 inches. But the Monte Carlo was a two-door that sat on the longer 116-inch wheelbase, and the difference was an extra-long hood – the longest in Chevrolet history. With a base list price of $3,123, the Monte Carlo was $218 more than a comparable Chevelle.

The standard drivetrain in the Monte Carlo was the 350 cubic inch V-8 with a two-barrel carburetor and a three-speed manual transmission. As well, two- and -three-speed automatics and a four-speed manual were available. Optional engines included two different 400 cu. in. V-8s, and a huge 454 cu. in. V-8. The Monte Carlo got off to a great start, with 145,975 sold in the first year, which was about triple the sales of the Ford Thunderbird.

Motor Trend magazine tested a Monte Carlo along with two more expensive competitors, the Pontiac Grand Prix and Ford Thunderbird, in November 1969, and said the “Monte Carlo is an unqualified success in every respect...The Monte Carlo has a lot of luxury, a lot of performance and a lot of value-packed under its Chevrolet marque.”

There were very minor styling changes for the 1971 model year, including revisions to the front grille, headlights, parking lamps and taillights. Sales declined to 112,599 largely because of a two-month strike.

For 1972, the grill was changed again, and the parking lamps were moved from the bumper to the grill. The four-speed standard transmission was discontinued, due to lack of demand. Sales reached a new high of 180,891 units. 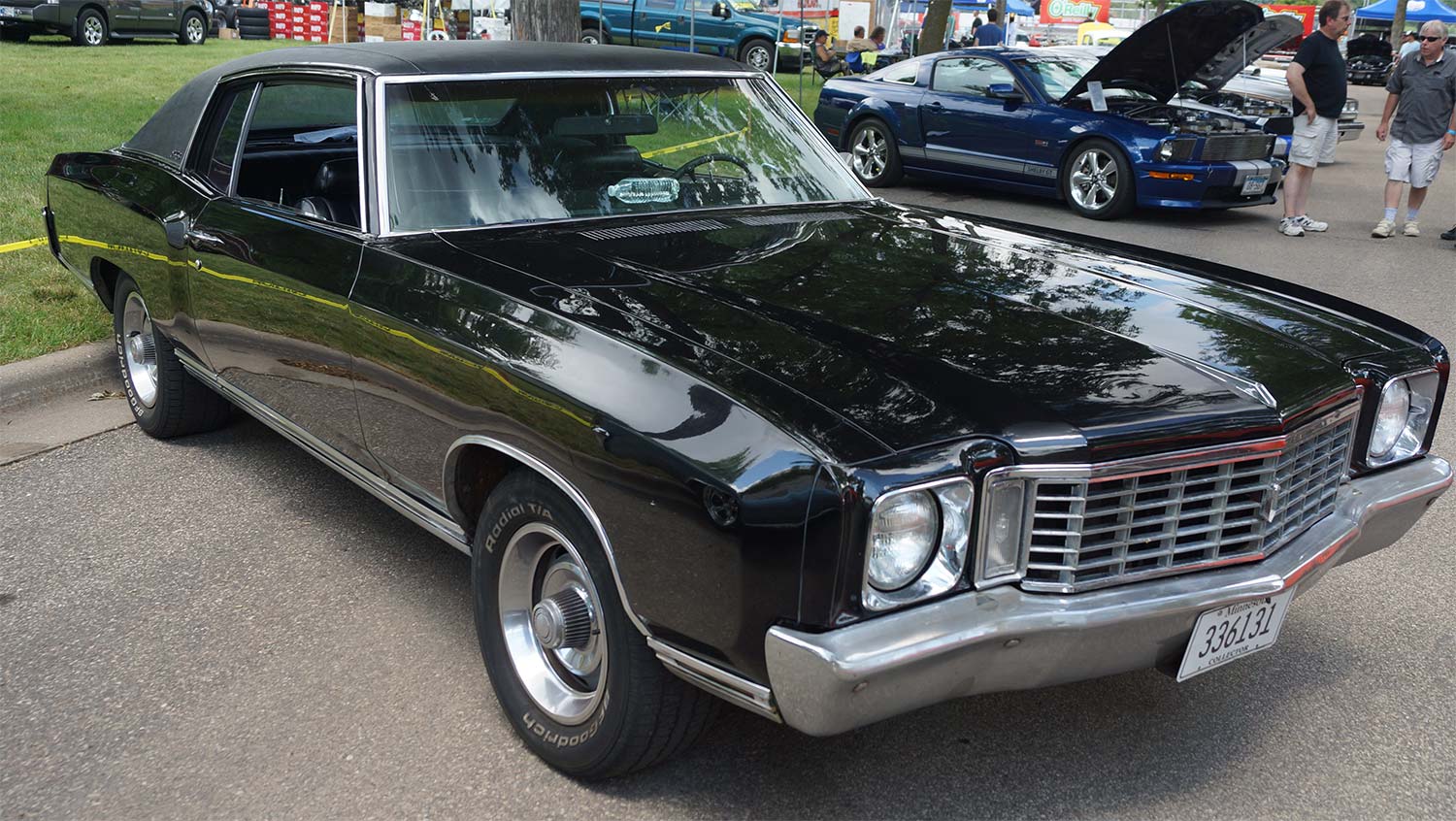 The Muscular Monte Carlo: The SS 454

Although the Monte Carlo was aimed at the luxury car market, early versions could also be ordered as a performance car with the $420 optional SS 454 package.

The 1970 Monte Carlo dealer brochure said, “In answer to the inquisitive enthusiast we say, 'Yes, there is a Monte Carlo SS.' It consists of a special package of performance equipment that you can order. Beneath the longest Chevrolet hood ever, we drop in the largest stock engine. The 454 cu. in. 360-hp V-8. Also included are: heavy-duty chassis components and SS exterior identification...Automatic Level Control and wide-rim 15 x 7 wheels with G70 x 15 white striped tires are included with the SS option.” 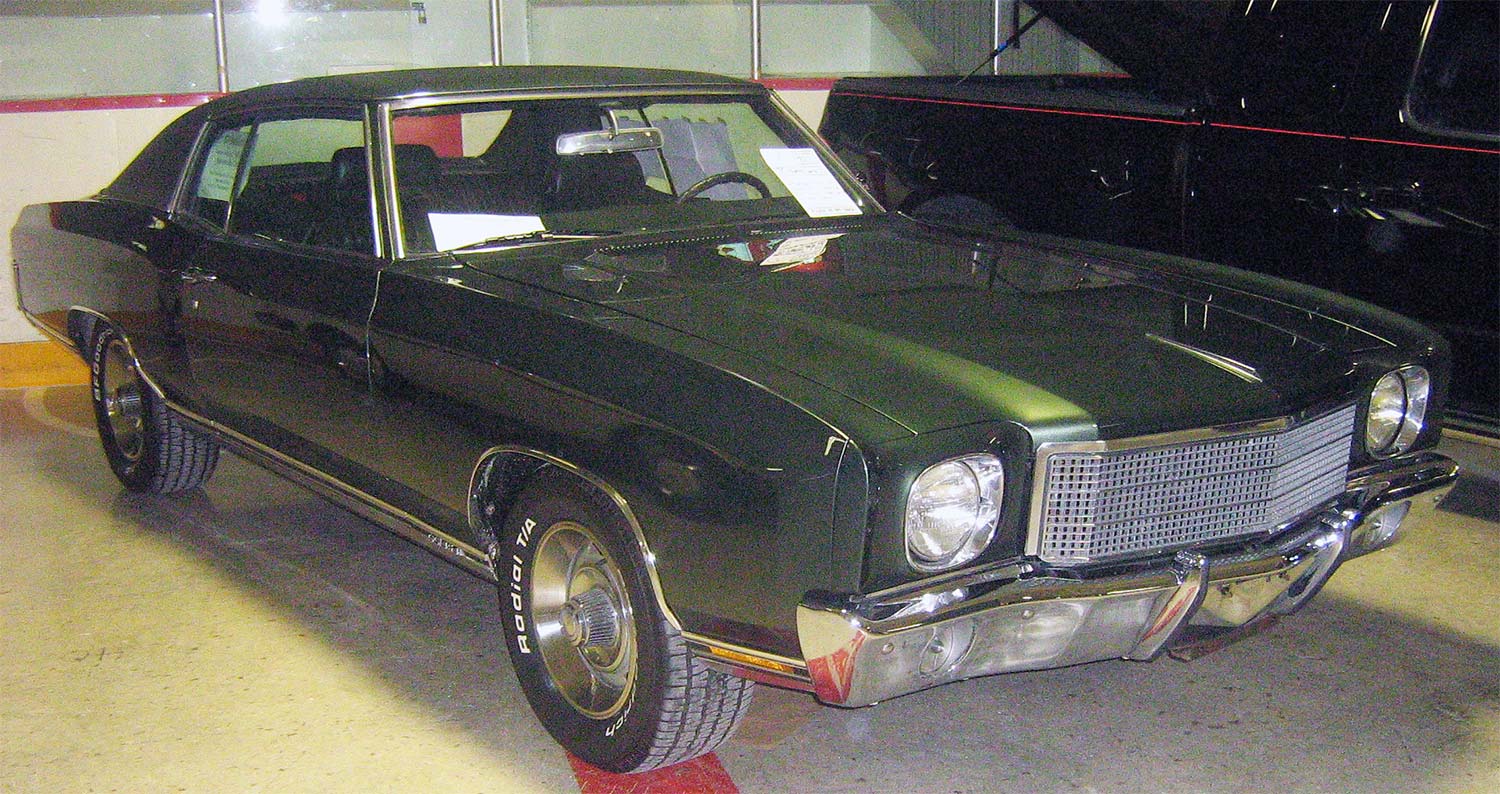 Motor Trend magazine found the SS 454 Monte Carlo was faster than the Grand Prix or Thunderbird, saying, “Our test car did 0 to 60 in seven seconds flat and a quarter-mile in 14.9 seconds and 92 mph. To say that acceleration is brisk would be an understatement.”

For 1973, General Motors redesigned all of its intermediate cars, including the Monte Carlo. The restyled Monte Carlo was named Motor Trend magazine’s “Car of the Year” and set a record with 233,689 produced. 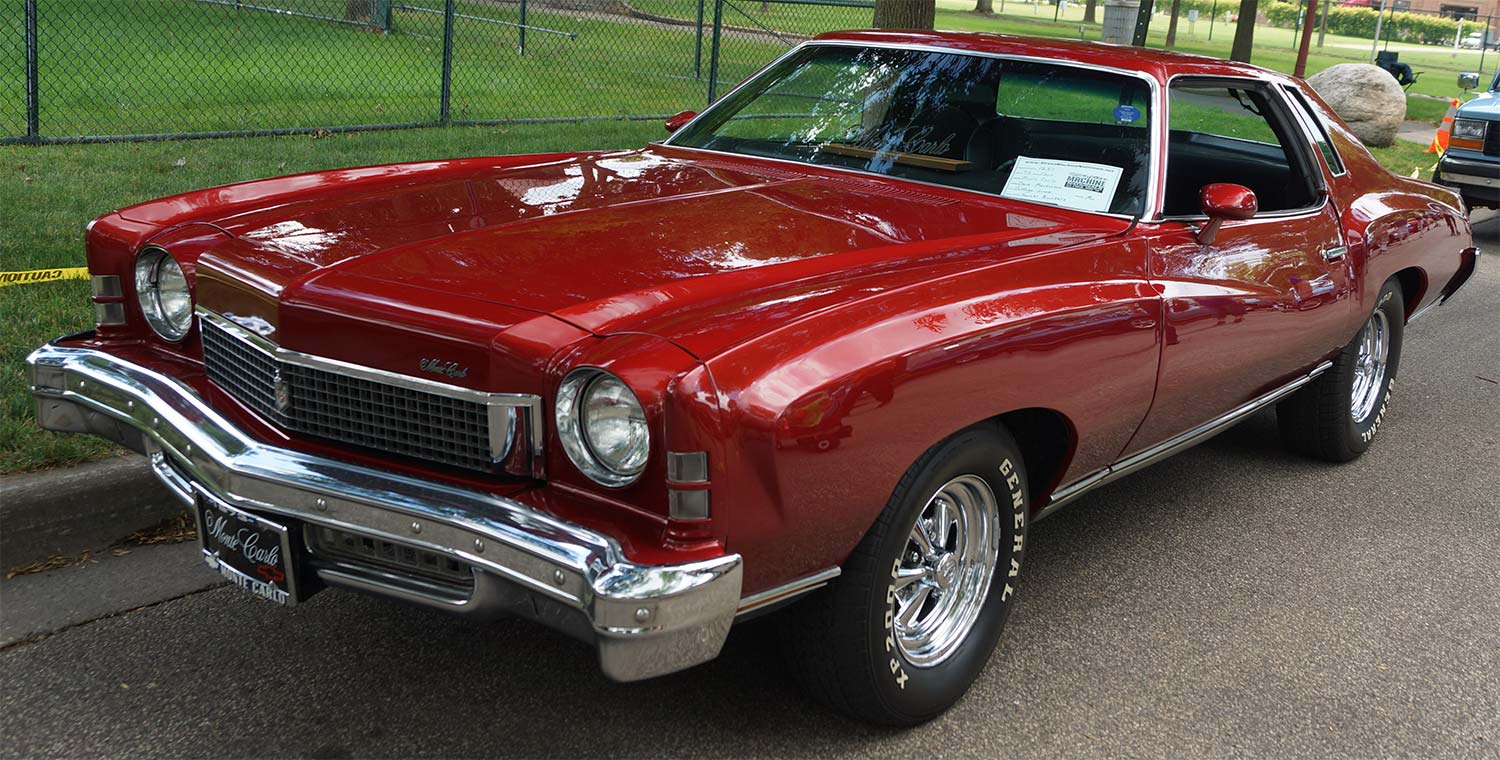 There were minor changes to the grill and lights for 1974, and in spite of a shift by consumers to smaller, more fuel-efficient vehicles due to the Arab Oil Embargo, sales of Monte Carlos increased yet again to 312,217 units. 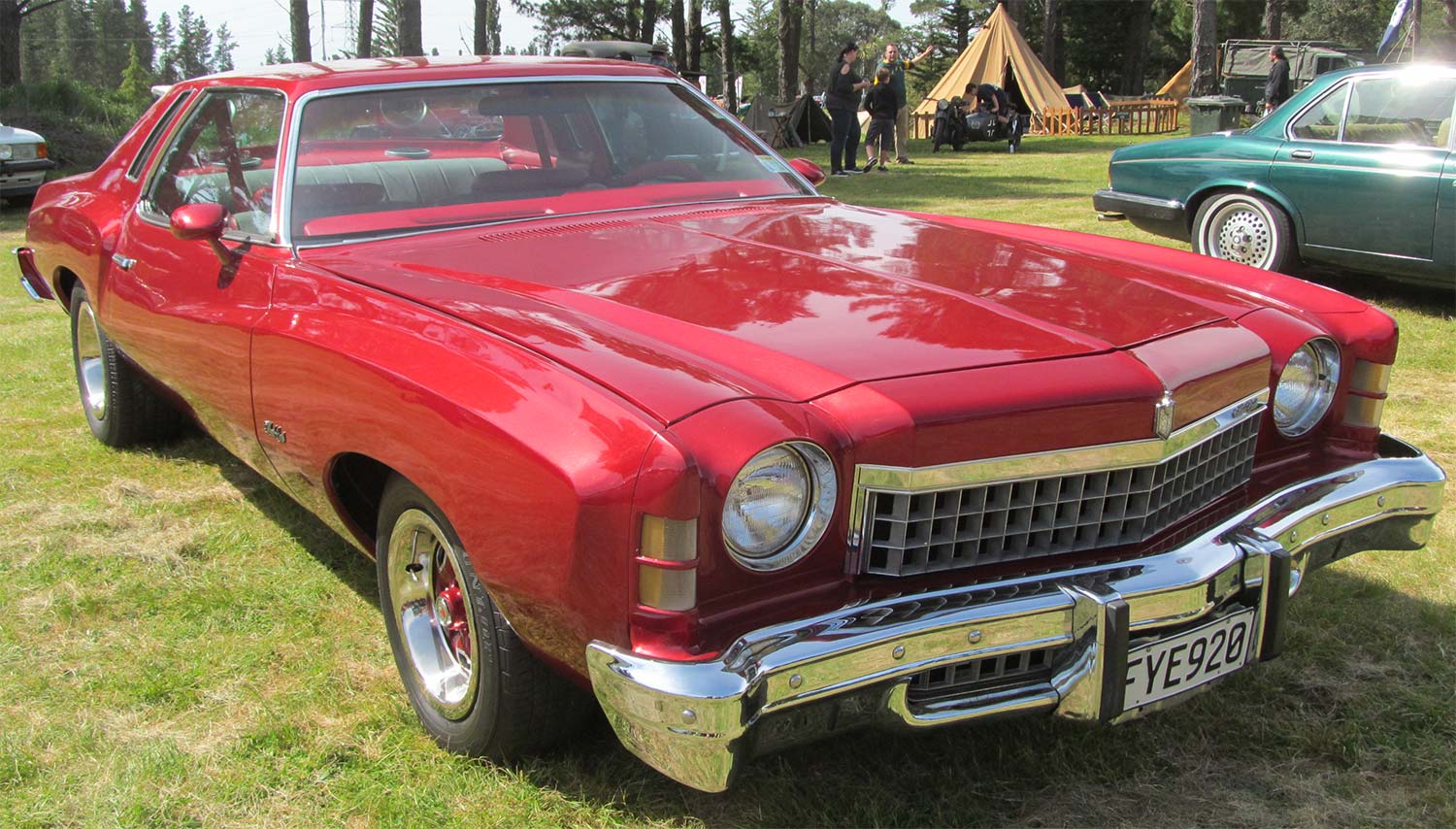 There were minor styling revisions in 1975 and sales declined slightly to 258,909 units, largely due to increased competition in the personal-luxury segment.

For 1976, the Monte Carlo got a new face, with stacked rectangular headlights replacing the single round units. As well, the grill was changed again. Sales hit a record high of 353,272 units. 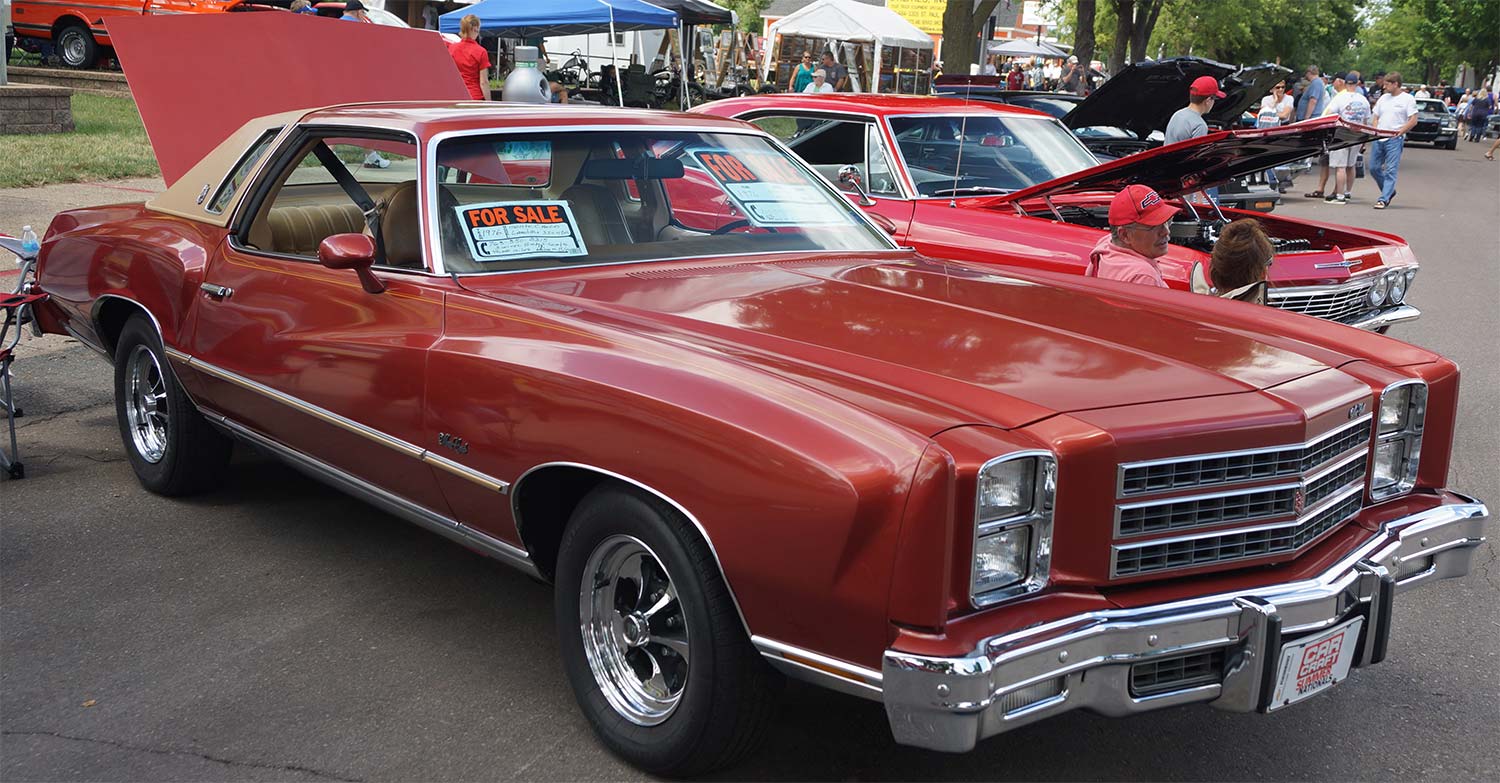 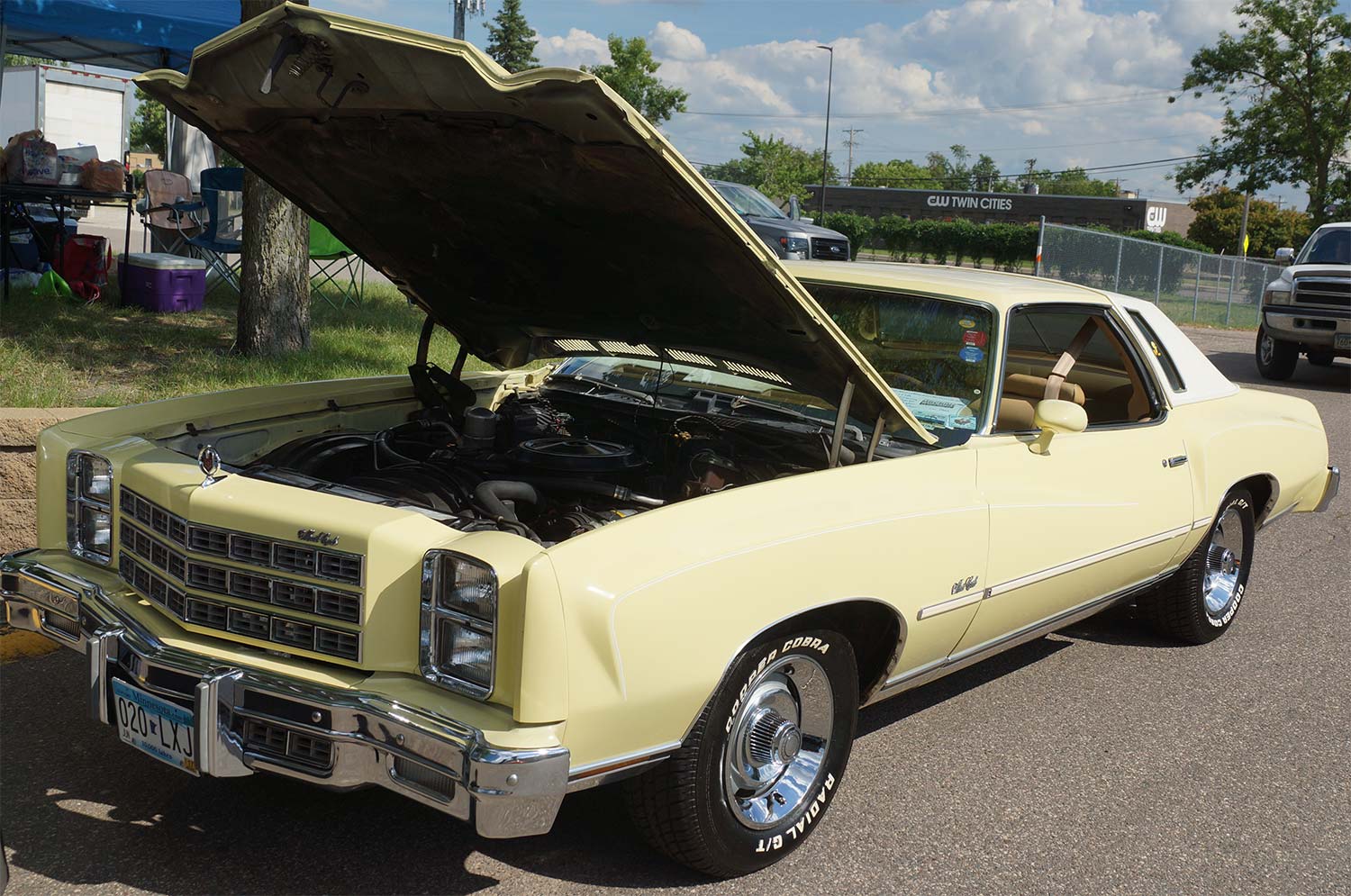 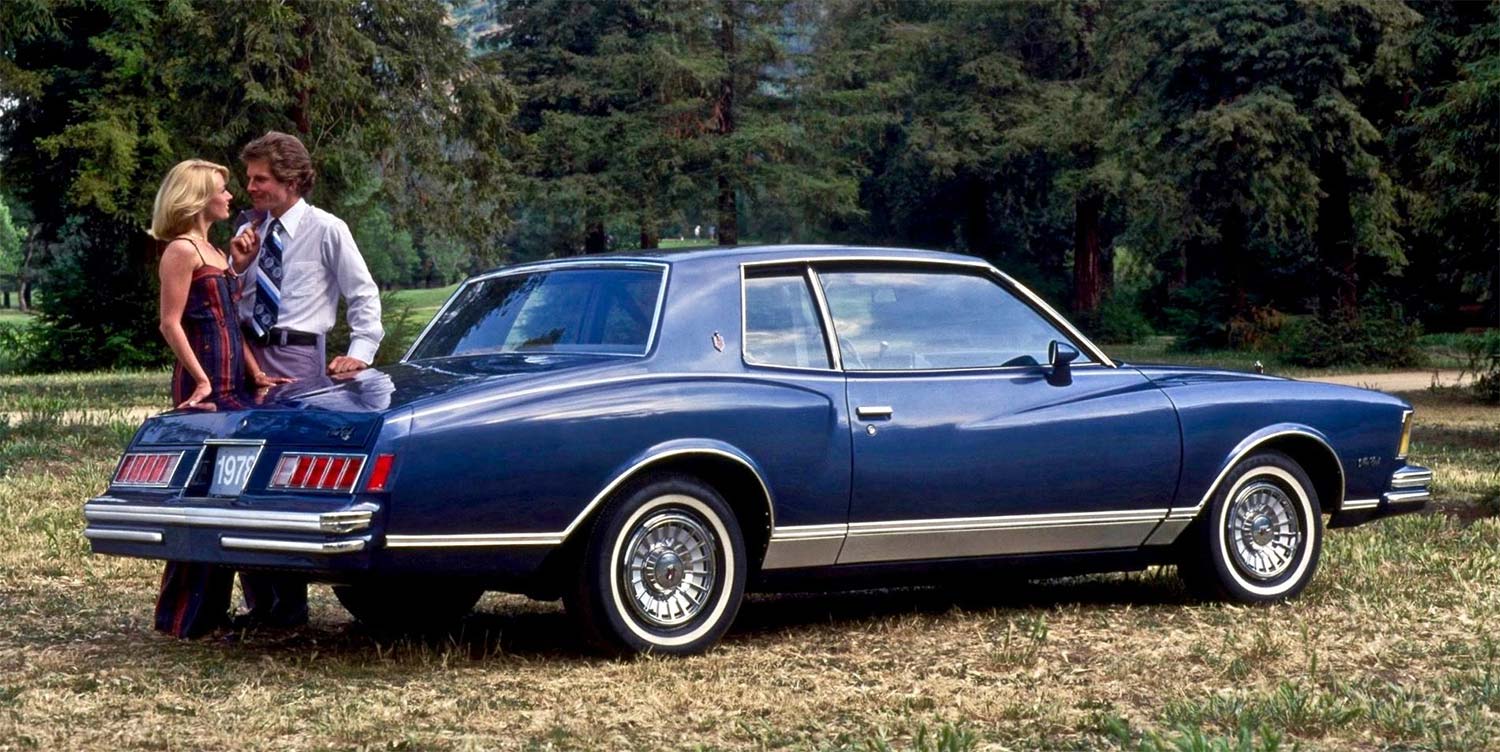 After full-size GM models were downsized for the 1977 model year, the 1978 the Monte Carlo – like other GM intermediates – was restyled, losing 15 inches and shedding 800 pounds, even though there was more interior and trunk space than in the previous year. The base engine was a 200 cu. in. V-6, and the largest gasoline engine available was a 305 V-8. As well, a 350 cu. in. Oldsmobile diesel V-8 was optional.

The dealer brochure for the downsized 1978 Monte Carlo read, "With immense pride, we present a trim and timely new edition of the Chevrolet’s popular personal luxury car: The Third Generation Monte Carlo. Although thoroughly redesigned, today’s Monte Carlo clearly retains the unique personality of Monte Carlo’s past…It is a car beautifully in tune with the times, yet emphatically apart from the crowd.”

Starting for the 1981 model year, the Monte Carlo was restyled and shared a body with other GM mid-size formal coupes, including the Buick Regal, Oldsmobile Cutlass Supreme and Pontiac Grand Prix. It remained on a 108-inch wheelbase with an overall length of 200.4 inches. The high-performance Monte Carlo SS was brought back for 1983. 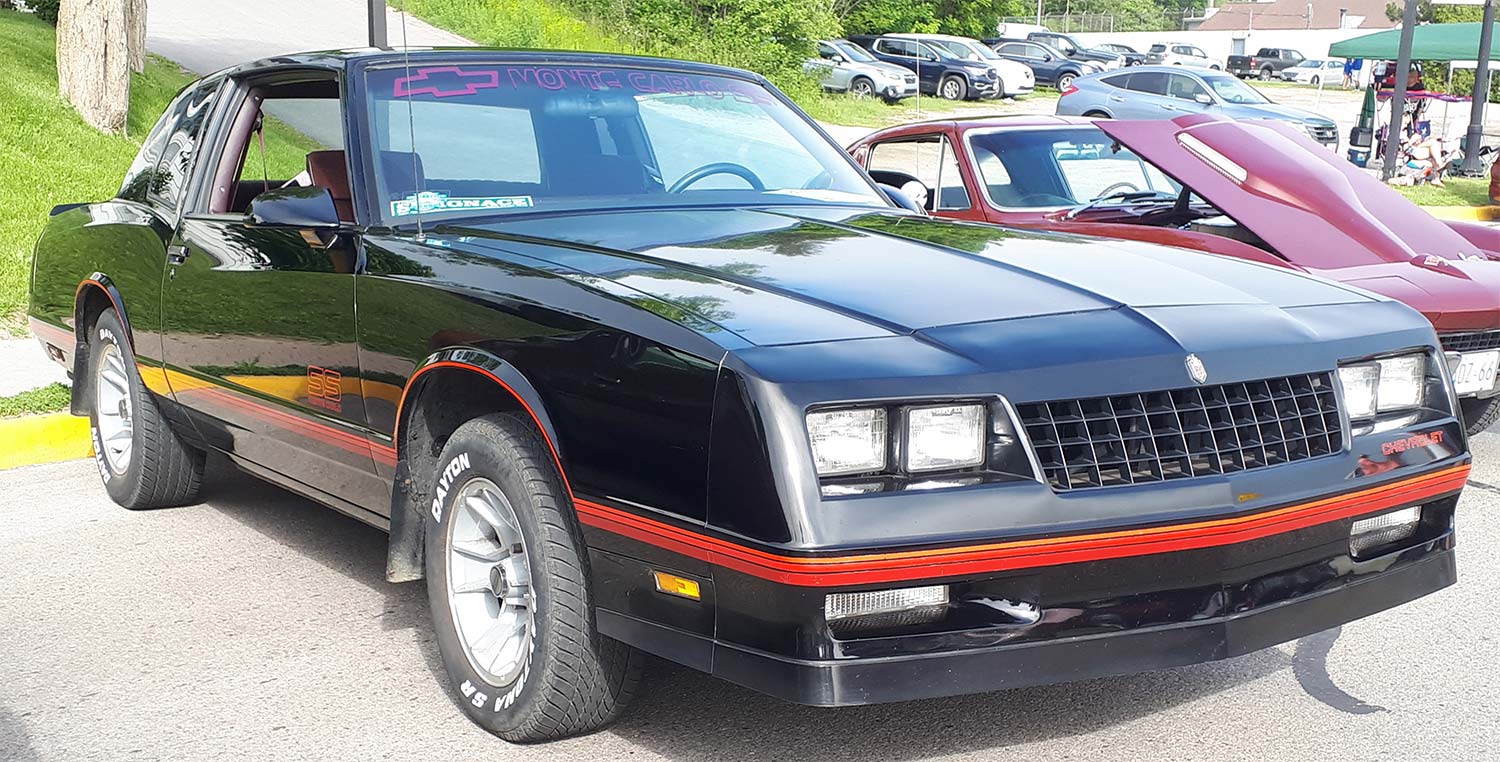 A special Monte Carlo for 1986 was the Aerocoupe, which included a huge fastback rear window to improve aerodynamics. This model was popular on stock car racing tracks and provided plenty of completion for the new sleek Ford Thunderbird on the NASCAR Winston Cup Series. However, sales of the Monte Carlo were declining, the last one was made in December 1987.

The Monte Carlo name came back for the 1995 model year, but it was essentially a new name for the Lumina coupe. The Lumina name, however, was retained for the four-door model. This generation of the Monte Carlo was front-wheel drive, and V-6 engines were offered.

For the 2000 model year, the Monte Carlo, although still front-wheel drive, was restyled to include some heritage Monte Carlo styling touches, including taillights that were similar to those from 1973-1977 and 1981-1987. 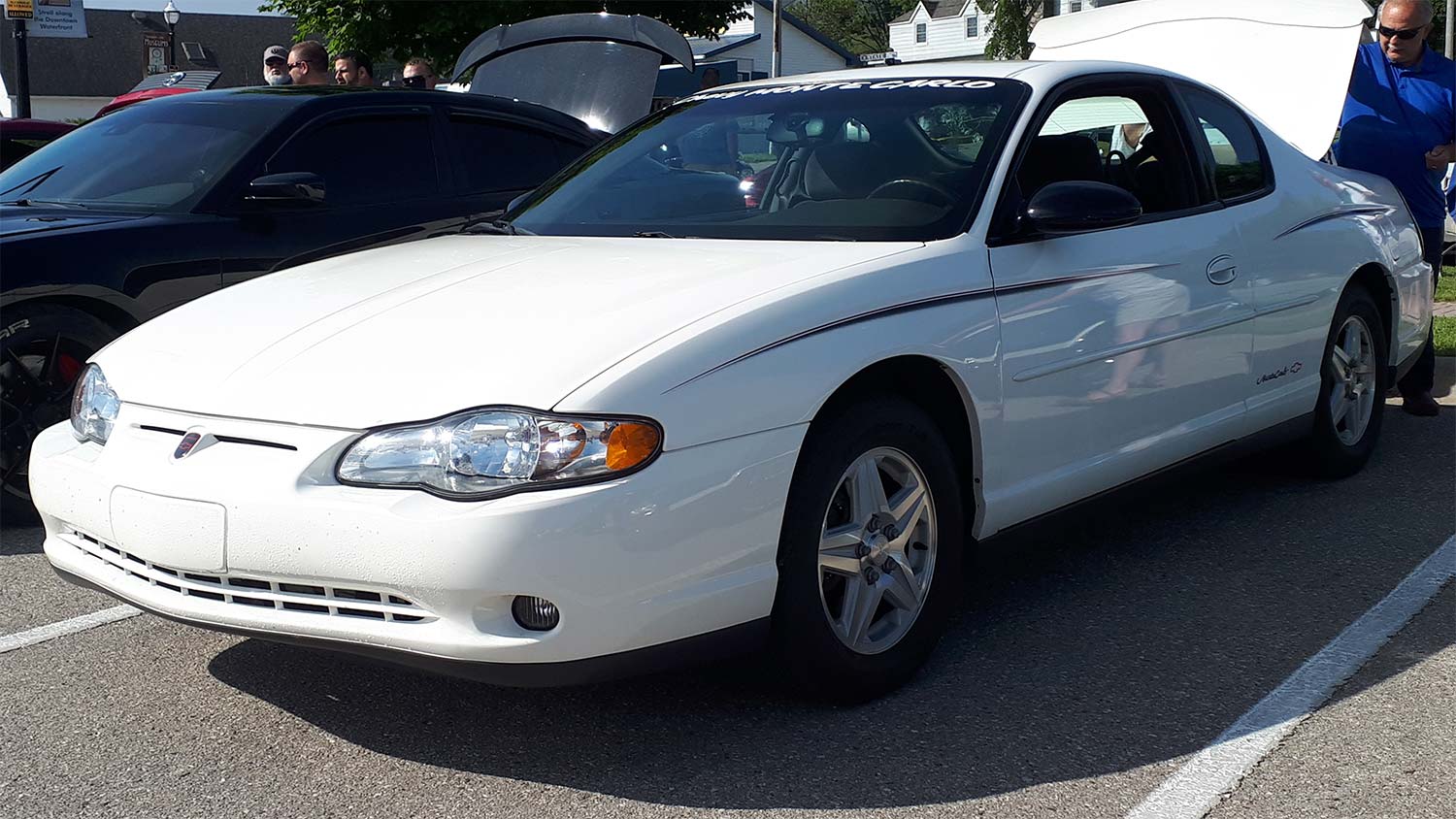 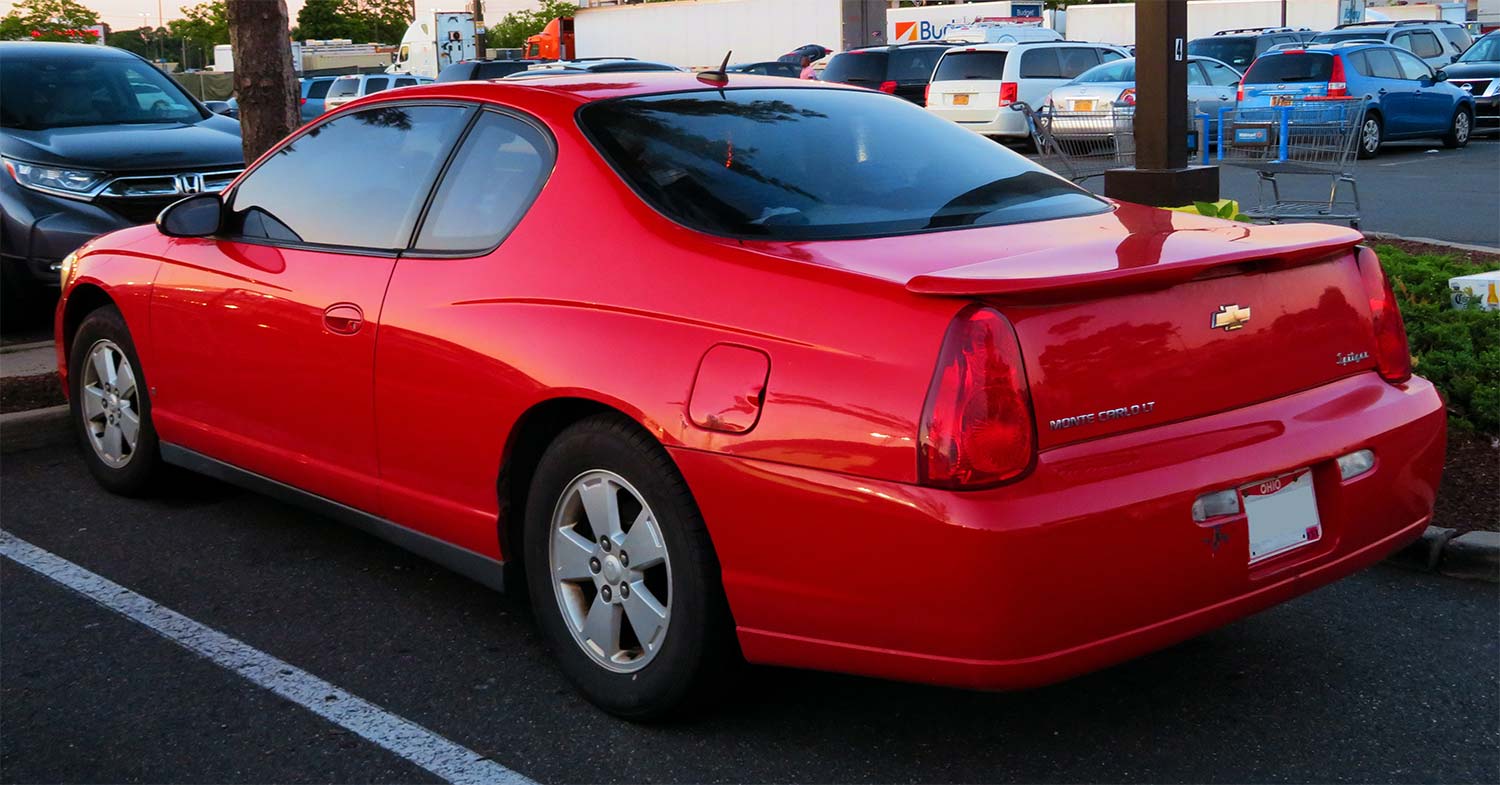