Fans of small, light pickup trucks fell in love with the Chevrolet LUV in the 1970s.

The trickle of little trucks from Japan that began in the late 1950s had grown into a flood by the early 1970s.

The growing market of small truck buyers included young people who had discovered the benefits of Japanese-made cars in the late 1960s and early 1970s, and business operators who wanted a smaller, lower-priced alternative to the trucks being turned out by the Big Three automakers.

While U.S. automakers introduced subcompact cars in 1970 – the AMC Gremlin, Chevrolet Vega and Ford Pinto – they ignored the growing small pickup truck market. Once this oversight was recognized, the Big Three scrambled to get in on the game as quickly as possible.

Rather than starting from scratch to create an entirely new vehicle from the ground up, the quickest route for Chevrolet to enter the small-truck race was to import Isuzu-made trucks from Japan and rename them. Chevrolet’s parent, General Motors, was a part owner of Isuzu, with a 34 per cent share in 1972, when it began bringing the Isuzu truck called the Faster into the U.S.A. It was the first Isuzu-built vehicle sold in the U.S.

The new little Chevy truck got a new name – along with a new front grill, badging and tailgate – when it arrived in the U.S.A. It was called the LUV, an acronym for “light utility vehicle” long before SUV became the common short form of “sport utility vehicle.”

(The Ford Motor Company – a part owner of Mazda – took the same route, also in 1972, with its Courier pickup truck, which was a Japanese-made Mazda B1600 pickup with a different front grill and tailgate. In 1979, Dodge used a similar approach with the Japanese-based Mitsubishi, rebranding the Forte as the Dodge D50 and the Plymouth Arrow.)

The Chevrolet LUV, which went on sale in March 1972, sat on a 102.4 inch wheelbase, had a six-foot bed and a carrying capacity of 1480 pounds. It was powered by a 110.8 cubic inch (1.8-liter), 75 horsepower SOHC, four-cylinder engine and a four-speed manual transmission.

The new LUV was part of a four-way comparison in Car and Driver magazine in August 1972, against the Datsun PL 620, Ford Courier and Toyota Hi-Lux. Car and Driver said, “The Chevrolet LUV is the best of mini-pickups because it has the roomiest cab. Its performance is about par with that of the Courier, but it doesn’t handle or ride as well. It isn’t nearly as quick as the Toyota, nor as quiet as the Datsun, and its finish and interior appointments are definitely more truck than car-like. But you can actually lean back and relax in the LUV, and do a couple of hours behind the wheel without getting a backache.”

From March to December 1972, a total of 21,098 LUVs were sold. The next model year saw very slight changes, and calendar year sales in 1973 almost doubled to 39,422. For 1974, a more luxurious trim package called the Mikado – which included striped upholstery and a three-spoke steering wheel – was offered, although calendar year sales declined to 30,328.

Sales surge in the ’70s - Love for the LUV grows

A three-speed automatic and disc brakes were new options available for the 1976 LUV. EPA mileage ratings improved to 23/city and 33/highway, up from 19/city and 29/highway the previous year. Calendar year sales increased to 46,670.

For 1977, the LUV was also available as a cab and chassis form so that a camper could be added. Another change was an increase in power to 80 hp, and sales were up to 67,539

Big changes came for the 1978 model year. Up front there was a new grill and just two headlights instead of four. Inside, there was a new instrument panel. A new option was a longer version on a 117.9 inch wheelbase with a seven-and-a-half foot bed, while the 102.4 inch wheelbase and six-foot bed remained standard. Sales were up to 71,145.

The big news for 1979 was the $971 optional four-wheel-drive. This new 4WD LUV was named Motor Trend’s “Truck of the Year” and the magazine praised it for being “a very well-engineered vehicle, solidly constructed, easy and fun to drive, and economical on fuel for a truck of this class.” Sales peaked at 100,192.

In spite of the new 4WD option, in other ways the LUV wasn’t keeping up with the increasingly stiff competition.

Perhaps it was because the LUV was never offered with an extended cab, unlike its competitors from Datsun (now Nissan), Dodge/Mitsubishi, Ford/Mazda and Toyota. Even Isuzu was selling its own mini-truck in the U.S. called the P’up. Maybe it was the LUV’s lack of power. When Car and Driver magazine road tested a 4WD in November 1979, the LUV took a leisurely 16.3 seconds to go from zero to 60 mph. To cover a quarter mile, the LUV consumed 20.6 seconds and eventually climbed to 67 mph. Car and Driver praised the LUV for it maneuverability and parking ease, but complained that “the steering is heavy and slow, the engine is positively anemic, and the cab is cramped for six-footers.” As well, the LUV was not the cheapest of the small trucks. With an as-tested price of $7,586, the LUV cost $884 more than a 4WD Toyota. 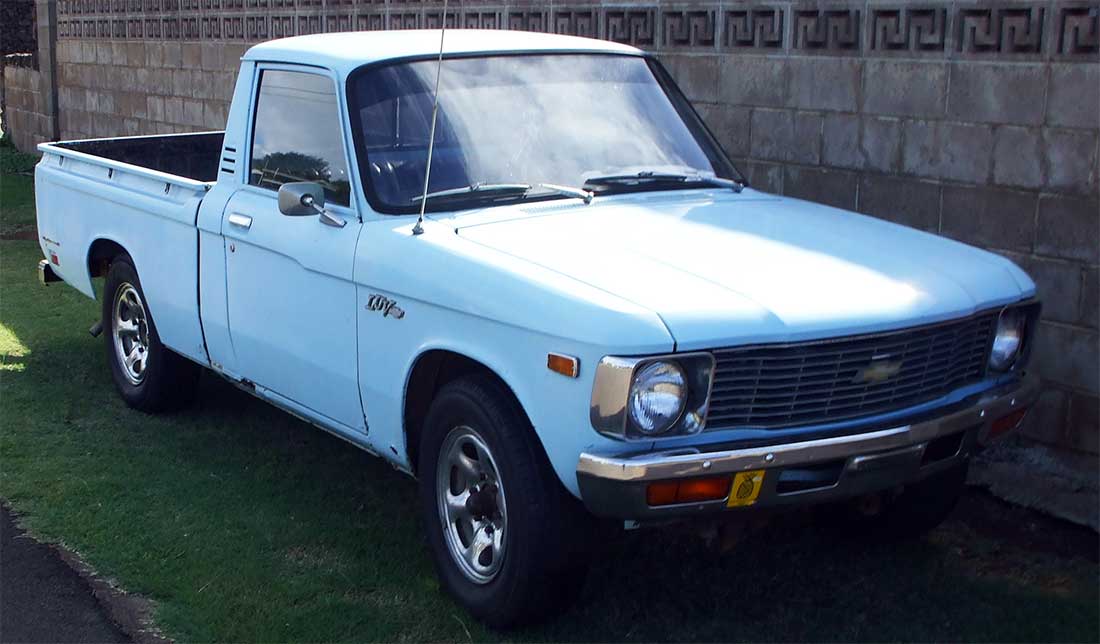 For 1980, sales declined to 88,447 units. When Car and Driver magazine compared seven small trucks, the Chevy LUV finished last, with the magazine complaining about a noisy, crude ride, a lack of truck options and a low-end interior.

The LUV was redesigned for 1981 and was more aerodynamic. The wheelbase was stretched to 104.3 inches, an increase of 1.9 inches, which provided more room inside. The instrument panel was updated. Weight was reduced, while payload capacity was increased. Brakes and suspension were improved. An optional diesel engine was offered. The Isuzu-made engine produced 58 horsepower and fuel economy was increased to 33/city and 44/highway. Sales slide to 61,724 units.

The end was in sight for the LUV when Chevrolet introduced the North American-made S10 pickup for the 1982 model year. The S10 was larger than the LUV, but smaller than a full-size pickup. The S10 came with a four-cylinder engine, and a six-cylinder was available. There were only a few changes for the 1982 LUV, and sales plummeted to just 22,204 units. Chevrolet dropped the LUV at the end of the 1982 model year.

During its 10-year run, half a million Chevrolet LUVs were sold. 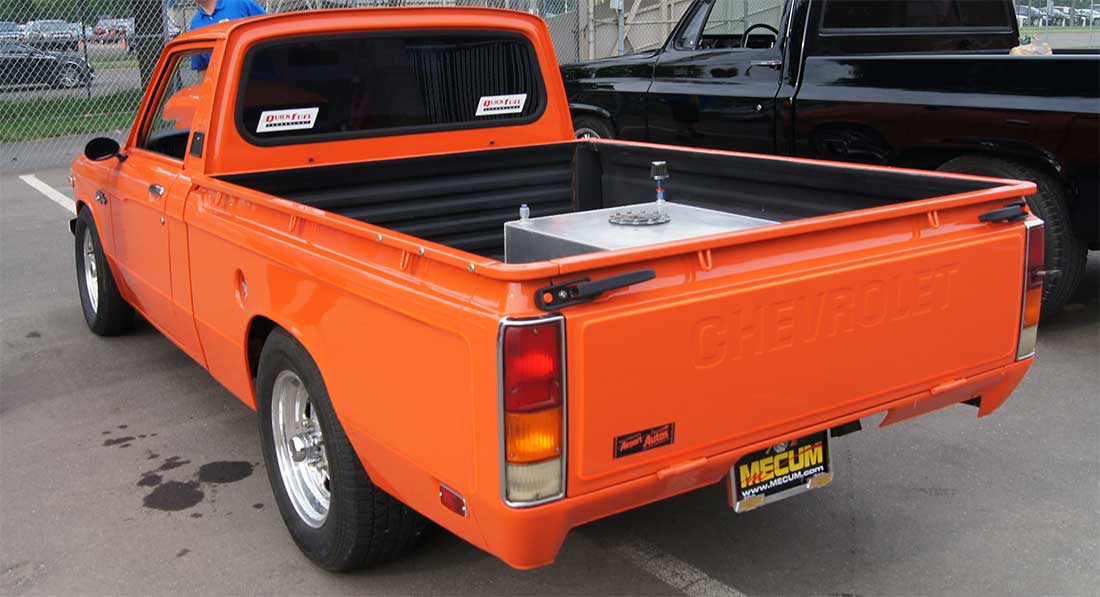 Renewed interest in the LUV - The latest LUV affair

In recent years there has been an increased interest in small trucks, and as a result, people are looking for Chevy LUV parts for sale. Fans of the first-generation LUV have discovered that the little 1.8-liter four-cylinder can be swapped out for a Chevy small-block 5.7-liter V-8.

This resurgence in interest in small trucks from the 1970s and early 1980s means some people are on the search for used Chevy LUVs – and Chevy LUV parts.

Collectors Auto Supply is the best resource for Chevy LUV restoration parts and the place to go if you are looking for Chevy LUV truck parts, or any other vintage auto parts or classic car auto parts.