You meet all kinds. I recently encountered an aging swinger, a well-worn scamp, an old matador, an imp that had seen better days, and a fading celebrity. But I didn’t see any people. I was looking at nameplates on old cars as I was wondering through an auto wrecker.

Although car manufacturers often use names from places, animals and famous people, some interesting characters have also lent their names to vehicles, like the Matador, a name used by Dodge in the early 1960s and American Motors in the 1970s, or the Chevrolet Celebrity of the 1980s. Behind the wheel of these cars, Walter Mitty-like, one could perhaps imagine being a real matador or a real celebrity. But I can’t imagine a real bullfighter actually driving to the stadium in either a Dodge or American Motors Matador. 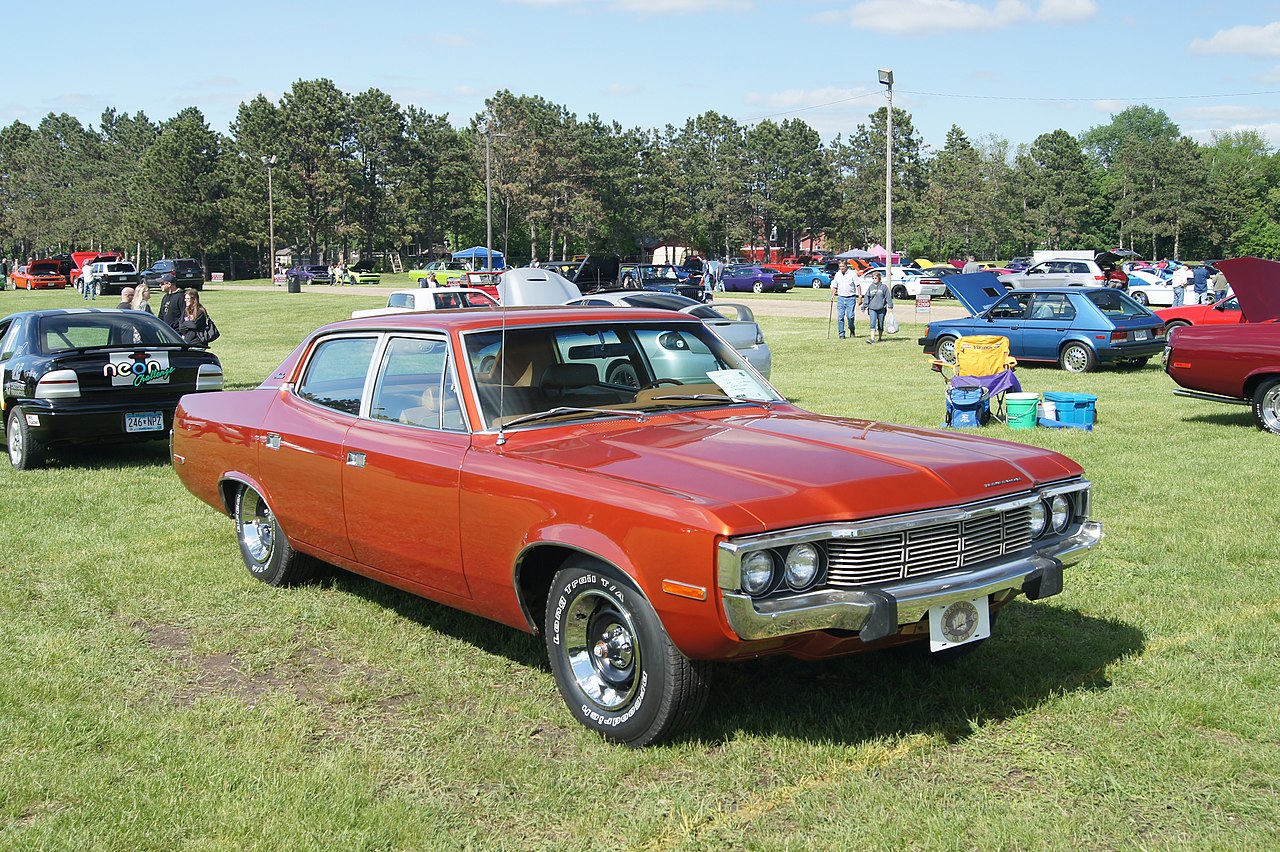 I don’t think celebrities – say Kim Kardashian or Johnny Depp – would actually drive a Chevrolet Celebrity. In 1969 Pontiac offered an option package on the GTO called The Judge – but it hardly seems like it was the kind of vehicle a real judge would have driven to the courthouse.

No doubt some lowly office clerk bought a Pontiac Executive. Or maybe an urbanite with a postage-stamp size front lawn might enjoy driving, and daydreaming, behind the wheel of a Ford Country Squire, imagining polo and ponies on a country estate.

But there are also examples of cars with names from lower stations in life.

One of the most desirable station wagons from the 1950s is the Chevrolet Nomad. But to non-car buffs, saying you’re a nomad would imply you’re a little on the restless, unsettled side. In the same vein is the Vagabond, offered by Kaiser in 1949 and 1950. Like a nomad, a vagabond wanders from place to place. The main difference is a vagabond has no visible means of support, while a nomad moves in search of something, like food for his cattle, or more favourable crop conditions. In reality, no vagabond would have bought a Vagabond, and no nomad would have purchased a Nomad. And being a nomad or vagabond are probably not career ambitions many people have for their children. At least the automakers spared us from similarly inspired offerings, like pauper, ragamuffin, rascal or tramp.

Some plain, basic compact cars of the 1960s and 70s came out with sporty, dressed-up models that used very far-fetched names. For example, the Rambler Rogue, a sporty version of the compact American, would not likely ever have actually been driven by a rogue, which by definition is a mischievous, playful, often dishonest and unprincipled person. Chrysler’s answer to the Rogue was a dressed up Valiant called the Scamp, which just happens to be another word for rogue or rascal. The Dodge Dart version of the Scamp was the Swinger. This is another perfect example of the kind of car that real swingers would most definitely not have been interested in. Perhaps the people who bought these cars wanted to think of themselves as rogues, scamps or swingers.

The mid-sized offering for American Motors, the Rebel, takes its name from one who rebels against authority. The true car buying rebels of the 1950s and ’60s didn’t buy Rambler Rebels; they bought small, imported cars like Volvos or Volkswagens. The American Motors Rebel was pretty consistent with what other U.S. auto makers were offering in mid-sized, mid-priced family cars. However, perhaps it was just slightly rebellious to go for an American Motors product rather than a GM, Ford or Chrysler offerings.

Dodge also tried to appeal to rebels – or those who thought they were rebels – with advertisements in the mid-1960s that said, “the Dodge Rebellion wants you.”

Naming cars after characters hasn’t proven as successful as other sources for car names. While some names – like Challenger, Charger, and Thunderbird – were brought back based on past glories, there’s no such talk of bringing back names like Gremlin, Rogue or Swinger.