One of the most recognizable car names, and car shapes, belongs to the Volkswagen Beetle.

However, the automaker was behind the general public when it came to the name of this car; what’s known as the Beetle was officially called the Type 1.

Then, in subsequent years, its official name changed to reflect the size of the engine displacement in cubic centimeters; hence the 1100, 1200, 1300 and 1500 model designations.

Volkswagen introduced the Super Beetle in 1971 and that’s when it began referring to the regular version as the Beetle. Most people didn’t notice this name change, because the bug-shaped car had been called the Beetle for years.

The Beetle was affectionally called the Bug by many people, because of its shape. There had been several different cars with “Bug” as part of the name, including the Bugmobile made in Chicago in 1908 and 1909; the Auto Bug produced in Ohio in 1909 and 1910; and the Red Bug in New Jersey from 1924 to 1930. In the 1950s there was the California-made Crofton Bug.

While Volkswagen is by far the most successful company to name a car after an insect, it’s certainly not the only one.

In the early 1970s Plymouth offered Cricket in the new subcompact market segment. Chevrolet had created the Vega and Ford brought out the Pinto. But cash-strapped Chrysler had no money to create a new vehicle. So Plymouth imported the British-made Hillman Adventurer, and when it got to this side of the ocean it was renamed the Plymouth Cricket.

In 1976, in the midst of the energy crisis, Nissan (then Datsun) came out with a Honey Bee, “the lowest-priced, highest-mileage Datsun.” It was a stripped-down version of the B-210.

I can’t imagine anyone getting this Honey Bee being confused with a Dodge Super Bee, a high-performance car offered from 1968 to ’70. The Super Bee included a 383 cubic inch V-8, modified with 440 heads, a stronger cam, rally suspension, a hood bulge, and bumblebee stripes. A 440 V-8 and six pack (three 2-barrel carburetors) was optional.

The smallest Pontiac ever offered, the Firefly, was introduced in 1985. It was extremely popular with young people, because it was low priced, inexpensive to operate, easy to park and fun to drive. A real firefly is a winged bug that comes out only at night and produces a soft light, especially for courtship purposes. 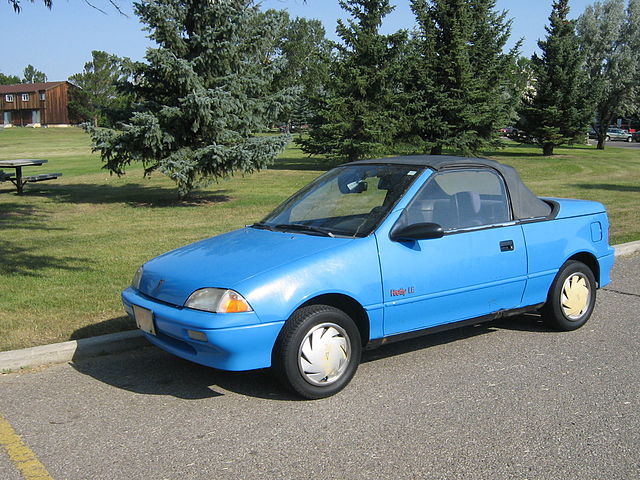 The Fiat Spider, offered from the late 1960s to the early 1980s, was considered one of the finest mass-produced Italian sports car. There was also a Corvair Monza Spyder in the 1960s. Actually several manufacturers have offered models called Spiders, including Alfa Romeo, Ferrari, Lancia, and McLaren. Sometimes it’s spelled “Spyder” and these include Audi, Maserati, Mitsubishi and Toyota. The spider name goes back to the days of carriages, when some thought that lighter, less cumbersome carriages with small bodies, no roof and large thin-spoked wheels looked something like spiders. When cars came along, the name was applied to small, sporty cars.

No firm liked insect names better than Hudson. In 1951, Hudson introduced the Hornet, a dressed-up version of its popular Commodore model. The Hornet become very successful in stock car racing. Hudson introduced its Wasp in 1952, as a fancier and more powerful version of the Pacemaker, and later added a Super Wasp. Hudson kept adding Hornet models, and by 1956 there was also the Super Hornet, Custom Hornet and Hornet Super Special. The Hornet name was dropped after 1957, following Hudson’s merger with Nash to create American Motors. But then the Hornet name was revived for an American Motors compact from 1970 to 1977.

Insect names have not been very common for cars, but it sure worked for the Volkswagen Beetle.