Old classic cars are getting more popular in the COVID-19 era. With many recreational activities on hold and commuting times reduced, many people have more time to explore new hobbies. For some, it may by renovating their homes or trying new recipes. For others, this is an ideal time to get into the old car hobby. As well, the migration of city residents to smaller towns and rural areas – because a virtual office can be anywhere – means more space provides more room to work on and enjoy classic cars.

Whether you are new to the old car hobby, or you now have more time and space to get back into old cars, there are lots of classic car parts available to bring vintage cars back to their original beauty. While there are hundreds of different makes and models to choose from, here are just a few cars from the 1950 to 1990 era that would be great for anyone new or returning to the old car hobby. 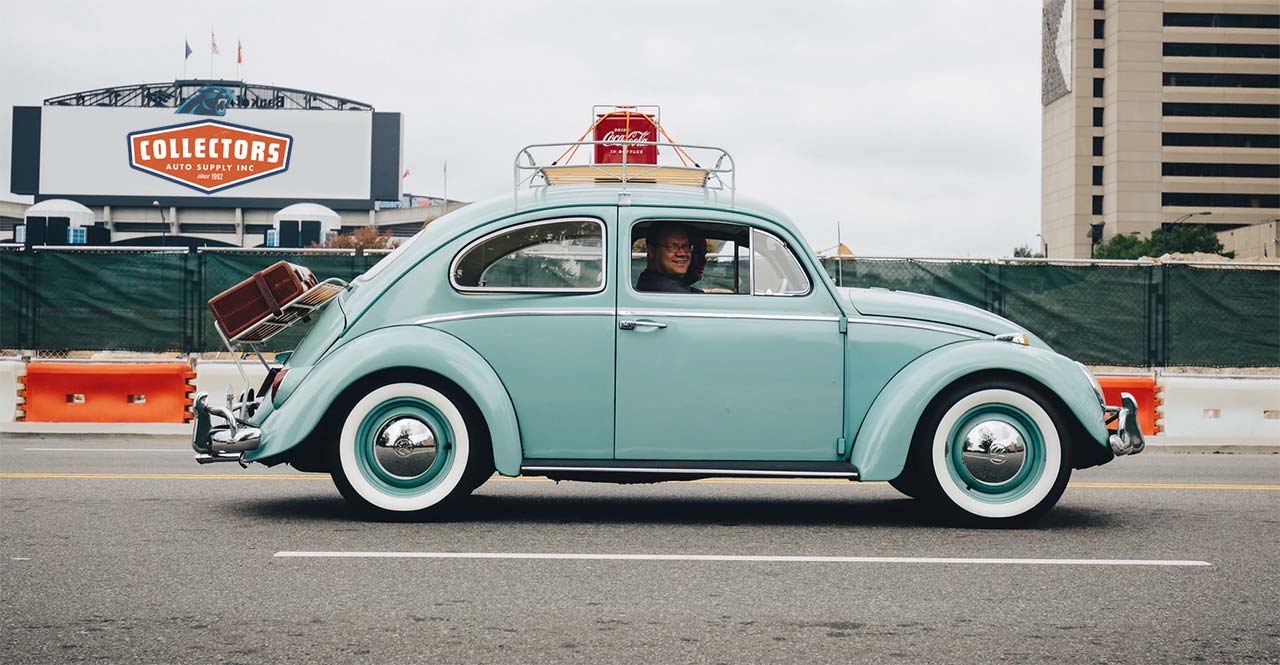 The second-best-selling car of all time (behind only the Toyota Corolla) with more than 21 million sold, the Beetle was inexpensive to buy and inexpensive to run. The distinctive shape, which resembled a beetle, makes the VW Beetle instantly recognizable. In the 1960s, the Beetle was by far the leading imported vehicle. For several years, more Volkswagens were sold in the U.S.A. than the next 10 imported brands combined. A large and loyal following of Beetles and the availability of classic Beetle parts make them ideal vehicles to collect and restore 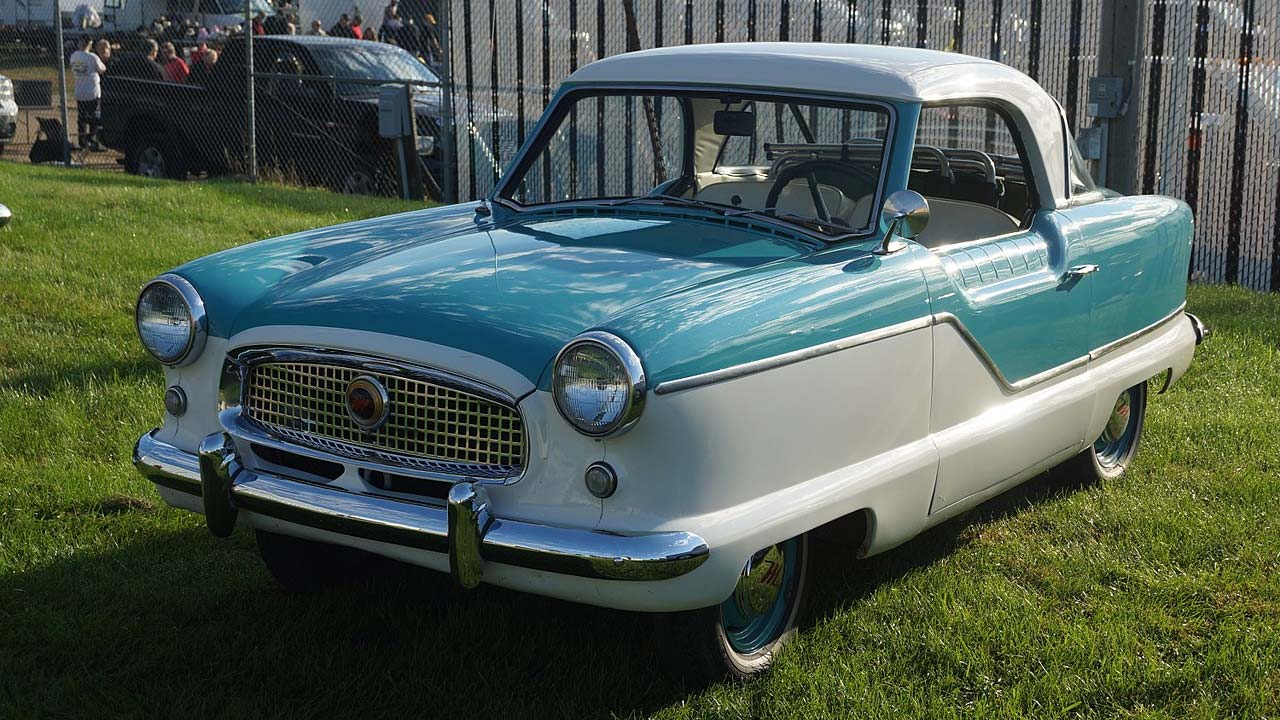 Sitting on an 85-inch wheelbase, the Metropolitan was by far the smallest car offered by a U.S. manufacturer. Metropolitans were sold by Nash and later American Motors dealers. Designed to look like a shrunken version of a full-size Nash of the early 1950s, Metropolitans were built in England and powered by Austin A-40 four-cylinder engines of 73 cubic inches, producing 42 horsepower. They were offered in bright colors, adding to their cuteness. In all, close to 100,000 were produced. The best year was 1959 when more than 20,000 were produced and it ranked second behind only Volkswagen in the imported car market. 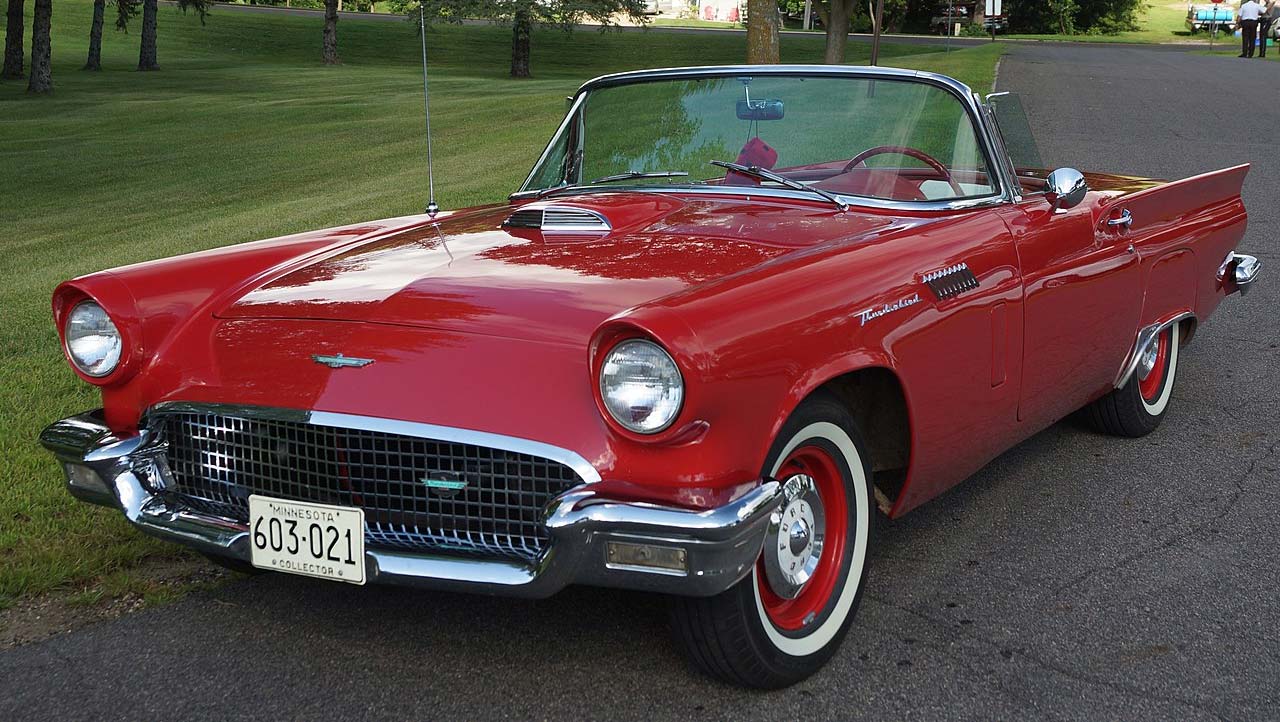 Ford brought out the Thunderbird as a competitor to the Chevrolet Corvette. But these early Thunderbirds offered more performance and luxury touches. After three years as a two-seater, the decision made to enlarge the Thunderbird and make it a four-seater. Sales increased, but for many people, the original, two-seater versions are the most desirable Thunderbirds. 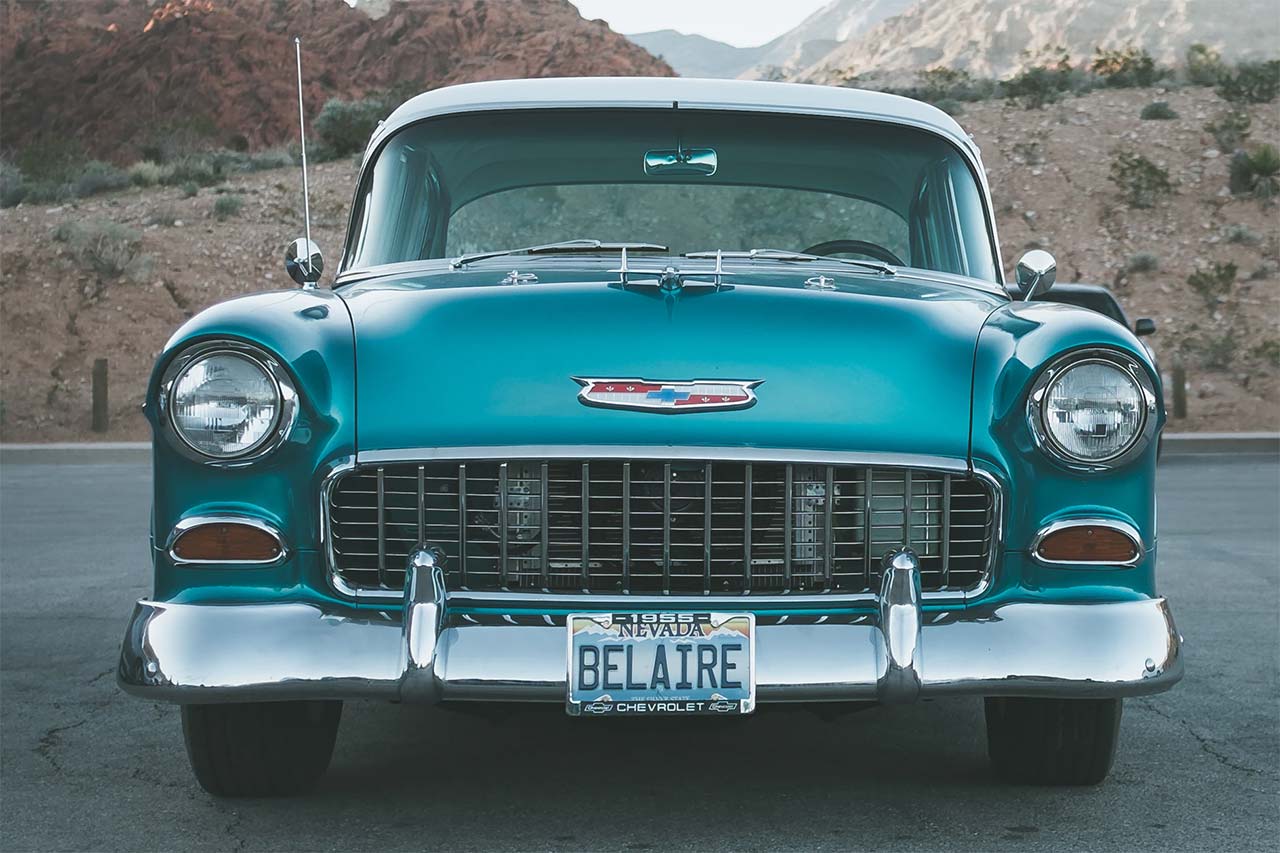 Chevrolet was completely redesigned for 1955, with a lower profile, a stylish egg-crate front grill and subtle tailfins. As well, an all-new V-8 engine was offered for the first time in a Chevy. There were new styling touches for 1956, including a wider grill. The 1957 version included larger fins and more trim. The ’57 is considered one of the most iconic vehicles of the 1950s, but any of the 1955-’57 Chevies are admired.

Chryslers were large, luxurious cars – and in 1955 they added a high-performance version called the 300C. The name was derived from the powerful 300 horsepower engine. Each year after that, designated by the next letter of the alphabet, more power and luxury touches were added to the 300 models. Even as horsepower increased, they continued to be designated as 300 models. The 1959 300E had the lowest production, with just 647 made. Although Chrysler used the 300 name on later models, after 1965 they are not considered to be like the original 300 series from 1955 to 1965. The original 300 letter cars are the most sought after for their performance, luxury and rarity. 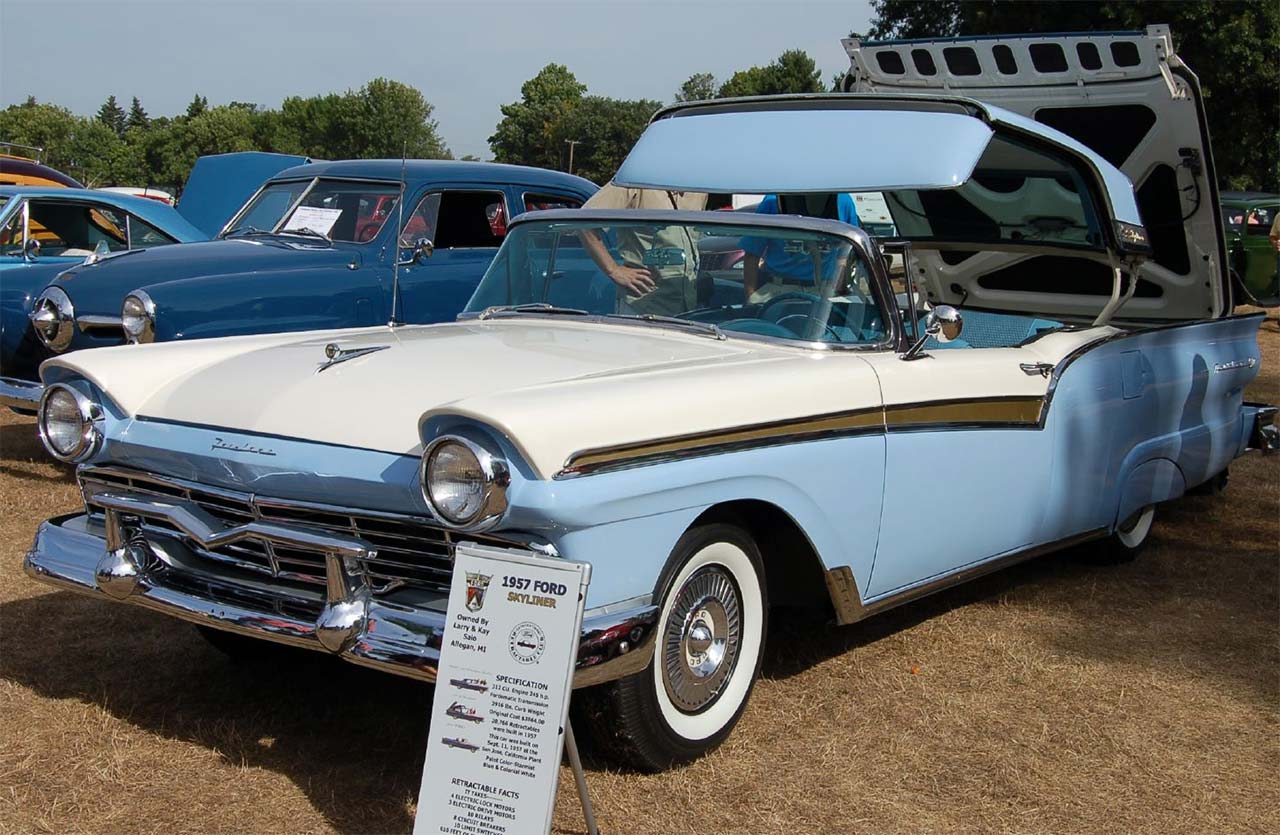 Despite the attractions of convertibles – the wind in your hair on a sunny day – there are downsides, like leaks on rainy days and the lack of security. Ford tried to get around these problems by coming up with a car with a metal roof that could slide into the trunk for open-air motoring. The Ford Skyliner was sold for just three years, from 1957 to 1959. The engineering was complicated, and to make room in the trunk for the roof meant very little room for luggage. Skyliners were innovative and they continue to attract lots of attention, especially when people see the roof disappearing into the trunk. In recent years, a few manufacturers have revived this concept, providing the best of both convertibles and hardtops. 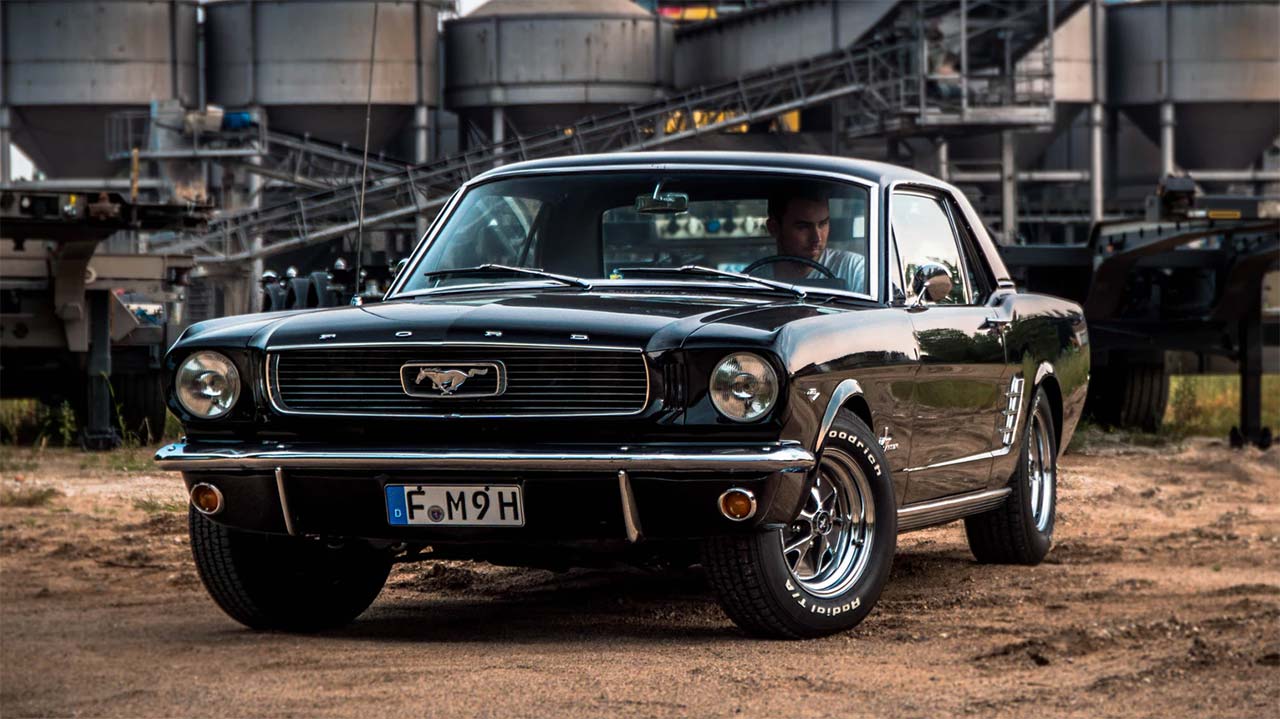 The Ford Mustang is one of the most successful cars of all time. The original Mustang was based on the compact Ford Falcon – but the Mustang offered a sexy body with a long hood and short trunk lid, and a wide range of luxury and performance options. The Mustang launched the pony-car segment, and soon all competitors were offering their own versions of the Mustang. But only the Mustang has continued in production to the present. Today, old Mustangs are plentiful and relatively inexpensive to restore thanks to lots of available classic Mustang parts. 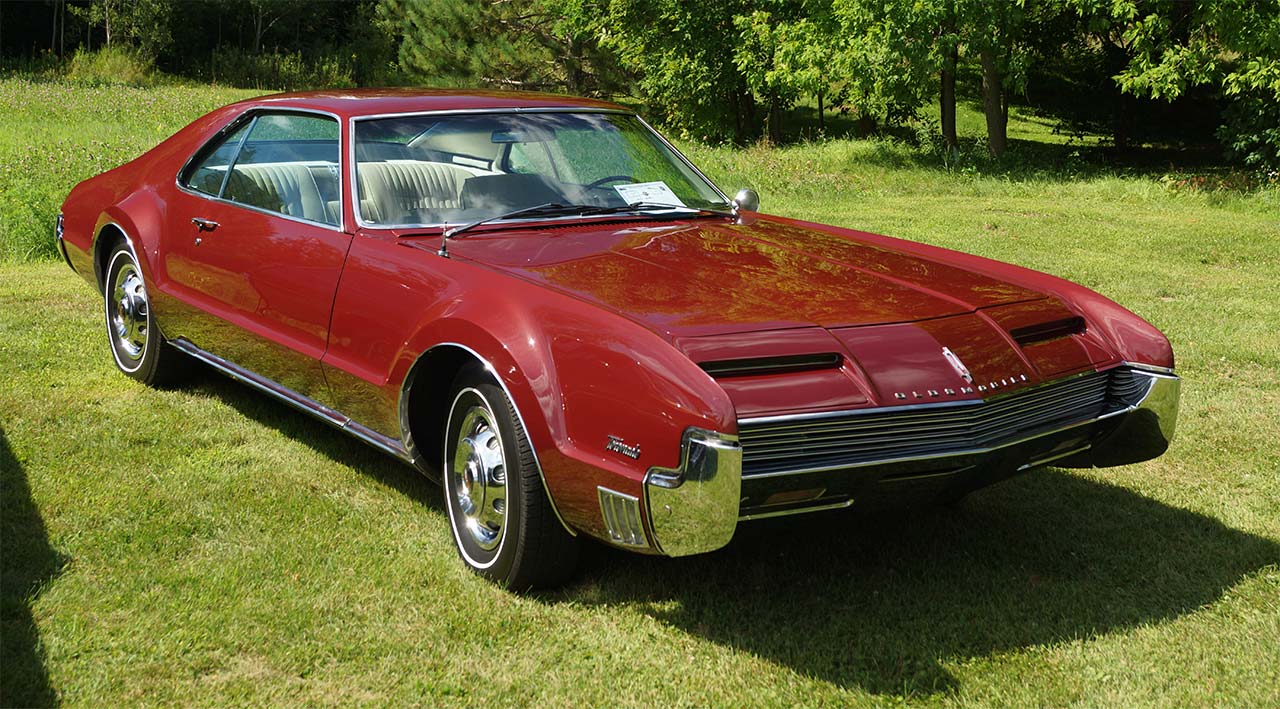 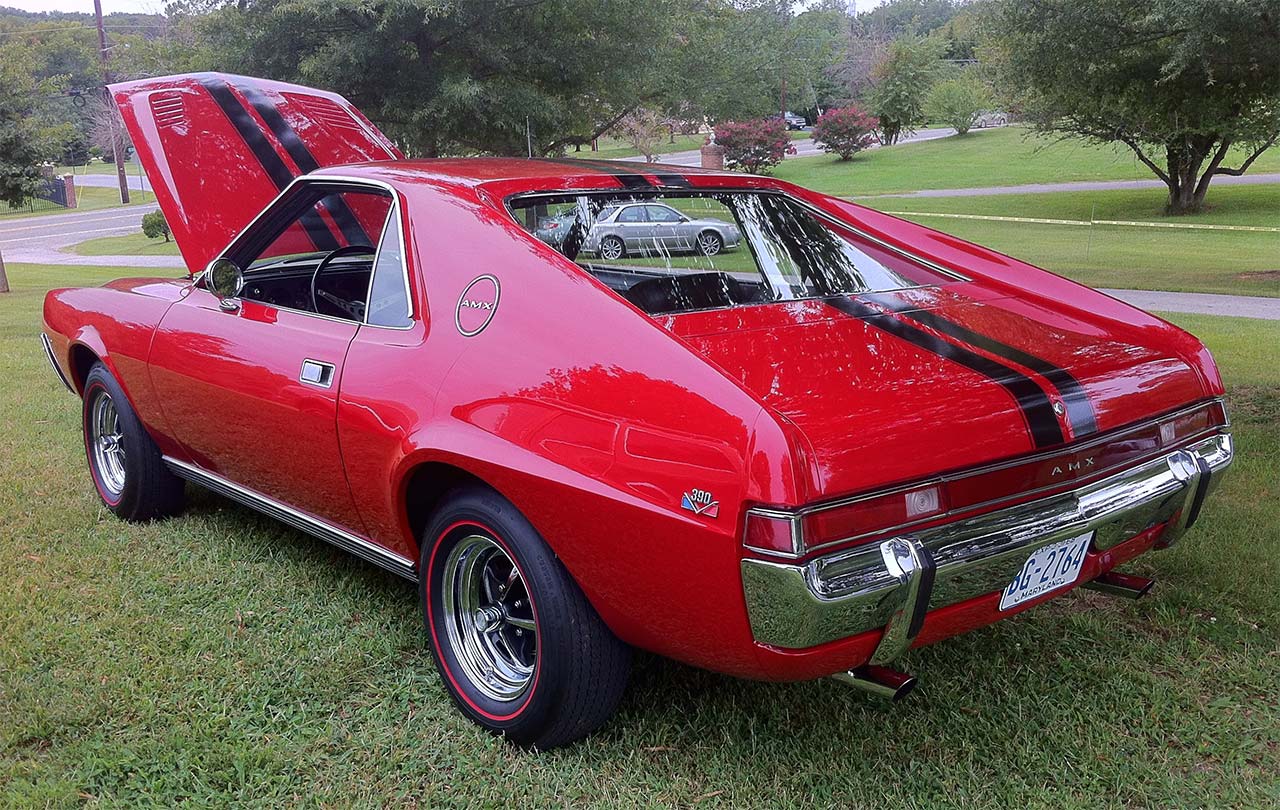 The American Motors entry into the pony car race was the Javelin. AMC also offered a modified, high-performance version called the AMX. It was based on the Javelin with a section chopped out right behind the front doors, shortening the wheelbase and eliminating the back seat. This two-seater took aim at the Corvette at a much lower price. Barely 15,000 AMXs were built in 1968 and 1969, which keeps both rarity and interest high. 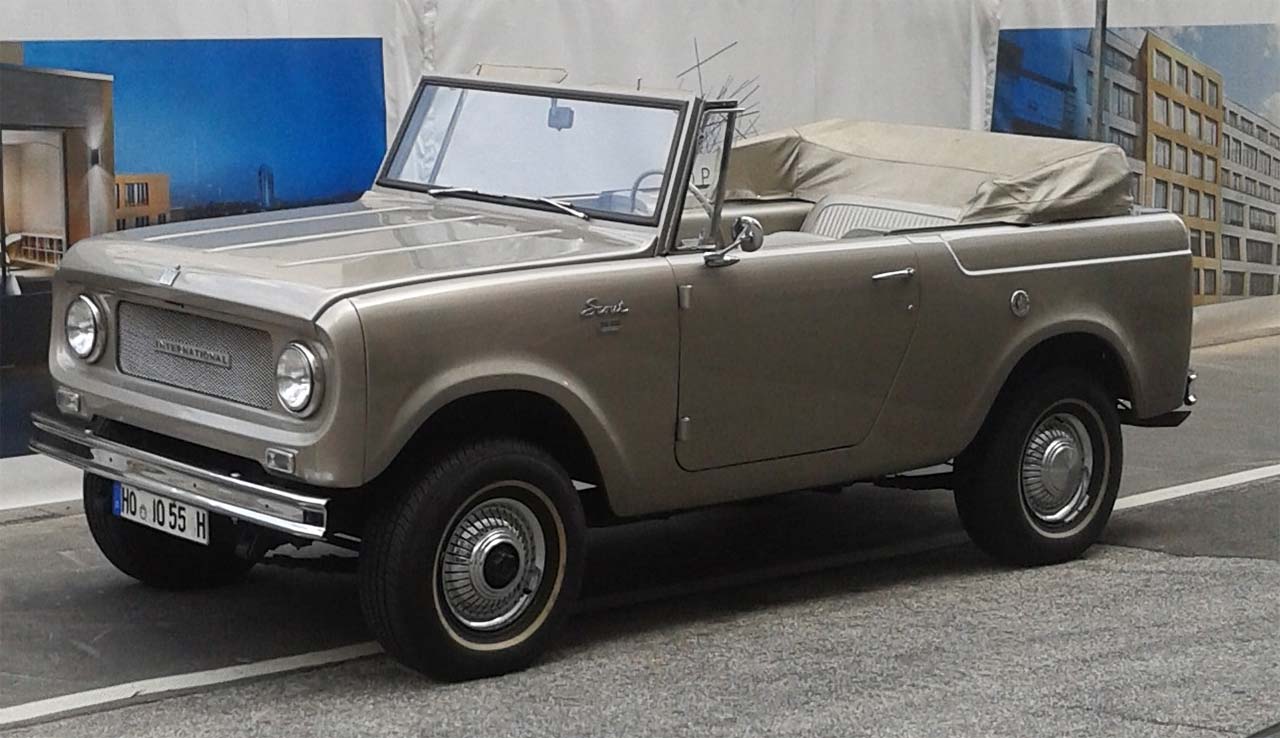 International Harvester was an early player in the compact four-wheel-drive segment with the Scout. It was a competitor to the Jeep, Ford Bronco and Chevrolet Blazer. However, the Scout was more compact and nimble than competitors. Facing financial problems, International Harvester got out of the light truck market after 1980, concentrating on heavy-duty trucks, and the firm’s name was changed to Navistar International in 1986. The Scout was available with a variety of options to personalize both style and performance and is a great choice for anyone looking for a rare SUV from the 1960s and 1970s – especially if you’re looking for something rare and less expensive than the competition. 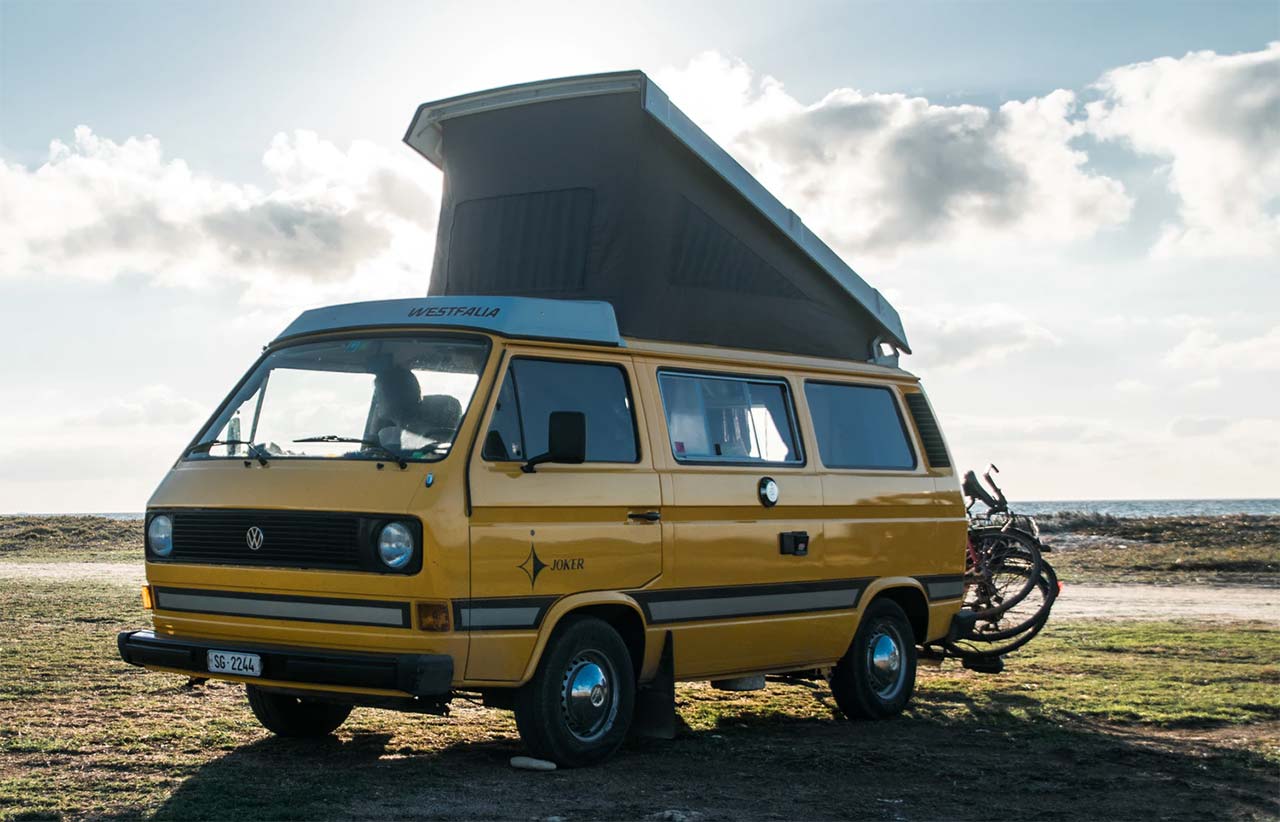 Volkswagen replaced its familiar van for 1980, and it could be a mini-bus, a cargo hauler or a compact camper, complete with a kitchenette and pop-top roof. Unlike other campers, the Volkswagen was easy to park and got good gas mileage, thanks to a 67-hp 2.0 liter air-cooled flat four-cylinder engine with a four-speed manual. Later came diesel and automatic options.

These days Toyota is best known for sedans (Corolla and Camry) and SUVs (RAV4, 4Runner), but in the 1980s it produced a two-seater, mid-engine sports car. The Toyota MR2 was powered by a 1.6-liter, twin-cam, four-cylinder that produced 112 horsepower. The lightweight car had good performance, and the price was low for such features and fun. 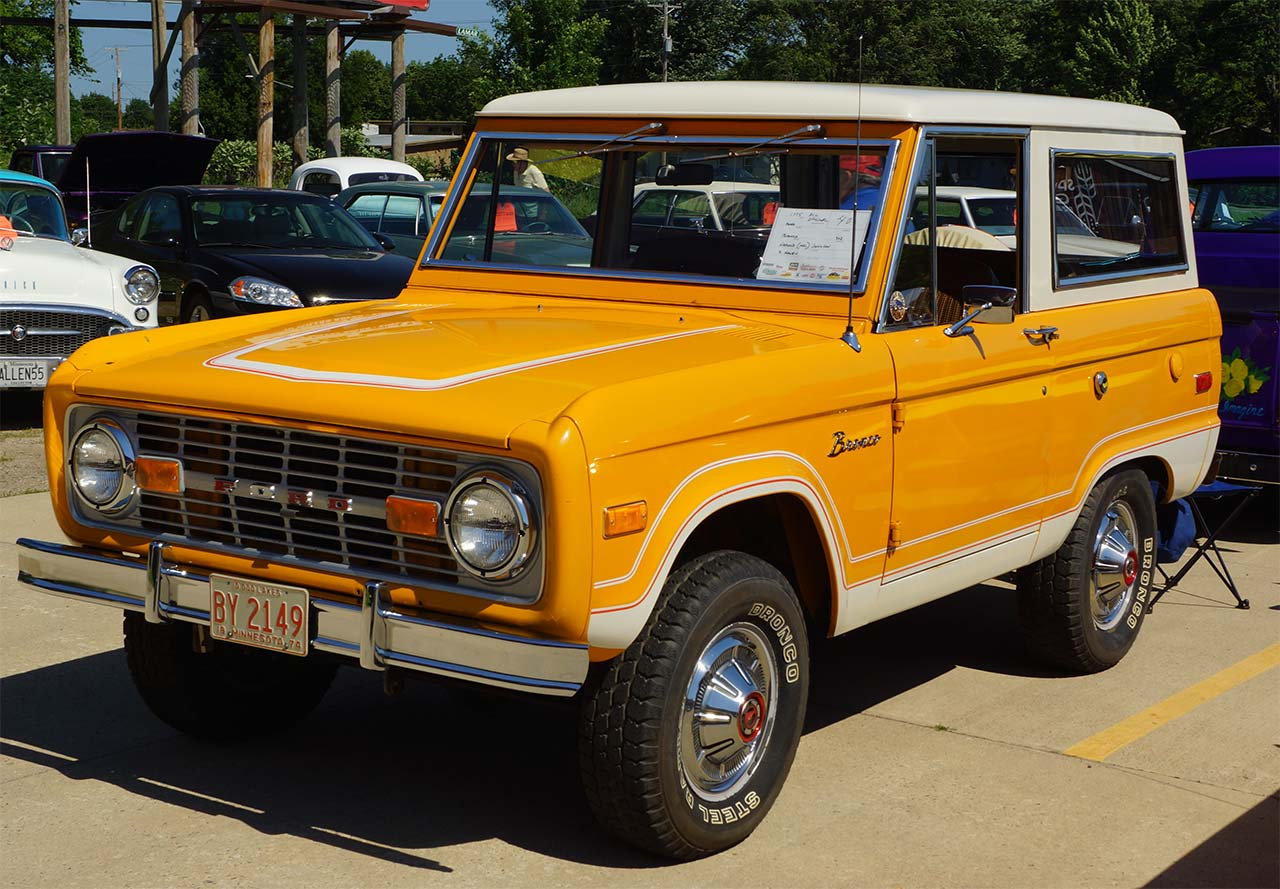 With the return of the Ford Bronco, interest is increasing in earlier versions – and so are values. The Bronco was introduced in 1966 in the early days of the four-wheel-drive craze. The Bronco grew in size during the 1970s and ‘80s, and in later years it was based on a shortened F-150 pickup truck.